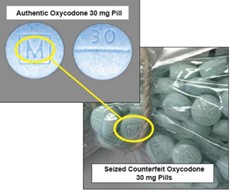 Drug overdoses remain a public health threat in Philadelphia, where 1,150 people died from unintentional overdoses in 2019. More than three- quarters of these deaths involved fentanyl, a potent synthetic opioid that is now commonly found in heroin, cocaine and other illicit drugs. Small amounts of fentanyl can unknowingly be present in these drugs and cause an overdose, even in someone who has developed tolerance to opioids.

The Philadelphia Department of Public Health is alerting providers to the presence of counterfeit controlled prescription pills that contain fentanyl. In September 2020, two female patients, ages 29 and 69 years, were seen in an emergency department in Philadelphia for overdoses associated with oxycodone look-alike pills they had purchased on the street. Both individuals responded to naloxone and, in each instance, urine drug screens were positive for fentanyl and oxycodone. Neither patient had a history of fentanyl use.