Republican House and Senate conferees agreed to final version of tax bill, which will head to final passage next week: The language was finalized late Thursday night. One remaining holdout on the bill was Sen. Marco Rubio (R-FL), due to concerns of the child tax credit. However, a compromise was reached as more money was put towards refundability of the child tax credit, expanding that part to $1,400, from $1,100. The expansion of the refundability piece, which is part of the $2,000 child tax credit in the tax bill, was made explicitly to secure Rubio’s support, which he confirmed Friday afternoon. The exact timeline for passage remains fluid, but it appears that the House will go first on Monday and will then move to the Senate which will have to deal with several procedural hurdles and possible absences from hospitalized Senators. The full language of the tax bill was just released Friday evening. Initial reports indicate that the package could benefit many owners of community pharmacies structured as pass-through businesses.

NCPA urges support for CMS Part D proposed rule: The proposal includes several NCPA-supported provisions, including a potential requirement to shift retroactive pharmacy DIR fees to point-of-sale instead. To demonstrate support, and counter potential PBM opposition, NCPA has developed sample comments for community pharmacists to personalize and submit to CMS. Please encourage community pharmacists to use them and remind them to please customize the message with personal experiences prior to submission. In addition, NCPA has organized a sign-on letter for pharmacy stakeholder organizations and allies to document their support. For more information, contact NCPA’s Michael Rule. NCPA is also developing formal comments to submit before the Jan. 16, 2018 deadline.

DEA urges tweaks to 2016 opioid law: At a Senate Judiciary Committee hearing Dec. 12, Demetra Ashley, DEA Acting Assistant Administrator, Diversion Control Division, asked Congress to modify the Ensuring Patient Access and Effective Drug Enforcement Act, which was unanimously enacted last year. She said that, while DEA is aggressively using the tools at its disposal, the law has made it more difficult to issue Immediate Suspension Orders (ISOs). Ms. Ashley also described agency enforcement (including involuntary surrender of 10 pharmacy registrations) and awareness efforts (educated 13,300 pharmacists/pharmacy techs and upcoming enhanced focus on doctors). Lawmakers largely responded along party lines, with Democrats suggesting repeal of the law and Republicans favoring keeping it. In defending the law, Sen. Orrin Hatch (R-Utah) recalled issues raised prior to its enactment and cited a 2014 NCPA survey of community pharmacists describing significant problems with legitimate patient access to opioids. The second panel featured witnesses who strongly criticized the law (Maryland’s attorney general and NABP’s Carmen Catizone) as well as a chronic pain patient advocate from the National Fibromyalgia & Chronic Pain Association concerned about patient access and the Healthcare Distribution Alliance’s John Gray, who defended the law, citing a GAO report and concerns of community pharmacists, and flagging the medical community as a potential source of the actual problem. Related, The Washington Post and 60 Minutes are scheduled to publish another joint investigative story on the topic Sunday. NCPA will continue to monitor the Congressional dialogue and present community pharmacists’ perspective.

FDA improvements in REMS requirements endorsed by NCPA: In comments to the agency, NCPA VP Pharmacy Affairs Ronna Hauser described how “our members continue to experience challenges with complying with myriad REMS requirements. We are supportive of the revised draft guidance and how it will standardize REMS information and better define who is responsible for meeting the differing REMS requirements. By reorganizing REMS documents in this way, burdens on healthcare providers and patients will be reduced.”

CMS announces Part D special enrollment period for select beneficiaries: Medicare beneficiaries impacted by the hurricanes in Puerto Rico and the U.S. Virgin Islands as well as the California wildfires will have until March 31, 2018 to enroll in or make changes to their prescription drug coverage. More details are available in CMS’ announcement.

NCPA joins opposition to health insurance tax: NCPA, along with 20 other small business-focused groups and associations, sent a letter to two Congressional committees urging them to suspend the Health Insurance Tax for 2018 and 2019. The “Stop the HIT” Coalition advocates on behalf of 29 million small businesses, their employees, and the self-employed. The letter urges Congress to stand on the side of small business by taking immediate action on the Health Insurance Tax suspension for all fully-insured plans as part of a year-end legislative package.

Senate health leaders seek state solutions to opioid epidemic: Senate HELP Chairman Lamar Alexander (R-Tenn.) and Ranking Member Patty Murray (D-Wa.) wrote to governors and state insurance commissioners to ask for input on recently enacted federal laws and what additional changes, if any, states recommend. The Senators request responses by Jan. 15, 2018 and indicate they are working to “develop bipartisan, common-sense solutions” providing states with the “tools and flexibility” to address the opioid crisis. 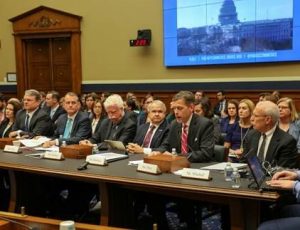 Some other specific issues raised include controversy around “co-pay clawbacks” on consumers; insulin price spikes and affordability; legislation to prohibit retroactive DIR fees on pharmacies (H.R. 1038); and CMS’ proposed Part D rule and its provision regarding a “lock-in pharmacy” program in Part D. About the latter, Hoey said while NCPA is generally supportive, CMS must remain vigilant to ensure that the voice of the patient is heard, such as in choosing a pharmacy.

NCPA staff, copied on this email, did a terrific job on the hearing, particularly VP, Government Affairs and Advocacy Karry La Violette and Director, Congressional Relations Adam Harbison in working with committee staff, Representatives on the committee and their staff.